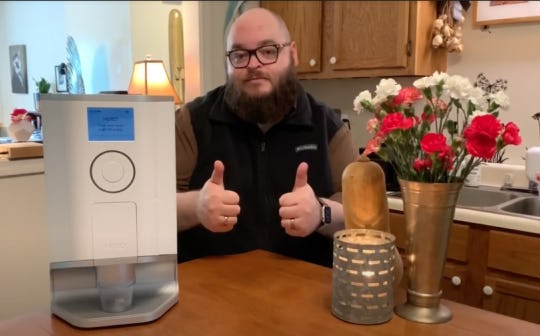 In this conversation with the Hero team, John Ellis reveals how Hero has reduced the psychological stress of medication management and has allowed him to focus on improving his physical and mental wellbeing as a PTSD and diabetes patient.

To get things started, we’d love to learn a little bit about your background and how you discovered Hero.

My name is John, and I'm on a journey to get healthier.

I have been gently reentering the workforce for about a year and a half after having some health issues. During that time frame, I’ve had a lot of different types of medicines that I’ve needed to experiment with and change up, depending on what doctors and other physicians would recommend.

I've always found myself overwhelmed by the concept of being on medication, let alone seven or eight that can change every two months with varying dosages. So, as I have started to try things in my life in order to deal with a new diagnosis, I found medication management to be overwhelming.

Between trying to become healthier, adhering to recommendations from physicians and managing so much medication, I just wanted that part of my life to be managed by someone else. And when that wasn't an option, I discovered that Hero could do it, so I decided to try to lighten the load a little bit by ordering Hero.

What are some of the health issues that you've had to face, and could you tell us about the importance of the medication that you take?

As we began learning more and more about what was going on with me, we found out that I had post-traumatic stress disorder. Along with that comes other things like anxiety, depression, and other types of problems.

The diagnosis of PTSD was a slap in the face. I think that being on different medications for a while helped help the physicians learn that the initial diagnosis wasn't correct, or at least not inclusive enough. Sometimes with PTSD and things like that, you can be misdiagnosed.

I don't know if I could express enough how much of a relief it is to know what's going on, but it's also something you don't want to hear. And again, it meant that my whole medicine regimen was about to change. So learning to deal with PTSD and how to treat that differently was a challenge, for sure.

Some of these also have side effects that make it difficult for you to keep up with everyday life, because they make you sleepy and make things difficult to remember.

I also found out I was diabetic, so my medication became very important. The biggest issue was the tapering down of certain medicines, and then changing over to other medicines. And when you're emotionally involved with how dependent you are on medicines, the last thing I want to see is another pill bottle. I don't want it. I don't want to see it, even though it's not a rational response. It's an emotional response.

With Hero, I don't have to look at all my medicines and think this is what my life has become. I don't look at 10 different medication bottles and start to judge myself or think, "Wow, this is so overwhelming." It really takes a psychological part out of taking medication that I don't know if others realize exists.

Now, I've got an orange, little light that glows and says, "For right now, this is what you need to take." It just gives it to me, and I take my stuff from there. I check the little cup to make sure it's the right amount of pills but I don't stress over it. Zero. I have no stress over it whatsoever, because I'm not thinking about it.

It is good to know that my important medications are being tracked and I'm being reminded of what I need to take in a friendly way. Everything else that needs to be done will be done automatically, and I'll be reminded thoroughly when it's time to do so.  It's like having a nurse managing your medication and they just hand it to you and you just keep going. And if something changes, you change it in your phone and you're done.

How did you manage your medication pre-Hero, and what did you find particularly stressful about that method?

If you take a lot of medications, you can start to beat yourself up about the dependency on those meds. Even if you're doing a great job.

For me, I would question whether or not I had taken certain doses even when I knew I had. Occasionally, I wouldn't remember if I had actually taken them. I had those boxes where you do a whole week worth of medication. I would always do two weeks worth, because I didn't want to do it. I didn't want to divide up eight or nine medicines that could change in the next week. And even then, sometimes I'd worry. “What if I forgot to put the right pill in the right section of the box?”

You would think the more you have to do something, the better you would get at it. But with the medication, that wasn't the case. The more I did it, the more stressful it became. The more it felt like there was room for error. And so, managing it that way became something I didn't want to do.

Then, I started putting the bottles in rotation. So I always knew I got to pass this bottle aside, and then I'll know if I took the medicine. But then, I was looking at the bottles and I was not thinking about the progress, I was thinking about all this medicine that's in front of me and the hassle of it and how much I wish I could just be free from it. It just psychologically drained me.

No matter the method, I could never feel 100% confident that everything was being taken correctly. And I know for a fact I would skip doses, and sometimes I would double dose, which is dangerous when you're on things like heart medication, for example. Physiologically, it was endangering me.

And now, with Hero, I just don’t have these issues. I can't forget because it's going to grumble at me and let me know my phone's going to ding and let me know. And if I become confused, there's a history and there's customer support.

So by staying on top of your medication routine with our service, have you noticed improvements in your physical and mental health?

Yes. Not having to think about my medicines and having Hero do all the thinking has been very beneficial, as it gives me time to stress less about the medicine and take more time to meditate, workout, drink more water, and watch what I eat.

With Hero taking care of my diabetes medication, I’ve been able to focus on working out and not eating carbs. And I went from 365 on my blood glucose levels, down to around 92. At some point, I'm sure that I'll be able to come off the medication, but for now, I like the fact that I don't even think about the medication side of it. And the fact that when I added it to Hero, there's automatically a check to make sure that it's not going to interact with other medicines that I'm on, just in case the pharmacy misses that.

With other medications that get added and changed, missing just one medicine is enough to throw off your entire day. So if you're trying to make progress on managing your stress or your anxiety, and you miss a dose, you run the risk of having a much more difficult day. You can also confuse the side effects with you not making the progress that you wished to make mentally. I know this doesn't happen now because I don't have these moments anymore. But I don't feel it anymore because I'm always getting the right amount of medication.

When I do need to change my dosing in any way, I can ask the machine to help me remember to do that, even if the medicines aren't in the machine. Hero tracks everything that I need to take that's outside of the machine as well. So if I need to split something in half so that I can slowly come off of it, fine, it tracks that for me.

Got it! Out of curiosity, what's your current medication adherence according to the Hero app?

It should be at nearly 100%, but because I don't always take my B12, it's around 90%. My B12 is something I actively choose whether or not to take in that moment, because it is something I added because I wanted to add it. Other than that, it has to be near 100%. It couldn't be anything else. I don't skip doses. And if I do skip a dose, I'm made aware of it very quickly.

That's really great to hear. Besides the features of Hero that you already mentioned, do you have any other features that you particularly  enjoy?

I think my favorite feature is knowing that I'm not going to run out of medicine because Hero keeps up with when I need to get a refill. It's automatically being calculated.

When you're using those pill boxes to manage your medication, the boxes don't tell you when you're about to run out of medicines. Not having a refill when you need it can mean terrible side effects, and it can mean stress as you try to chase down the need of the... Or chase down a refill, trying to get the three-day emergency.

The Hero allows me to put 90 pills of medication in each slot, and when it's done or when it's running low, it actively tells me this medication is running low, even if I'm not using the Hero automatic refills. It gives me plenty of time to jump on my phone and get the refill ordered in advance.

I can't express enough how not having to panic about not having enough medicine isn't just a value that's life-changing. There's no more of those situations. It's peaceful.

And as a final question, in your opinion, what makes Hero really worth it?

Just the other day, I was staring at the machine and I was thinking about the monthly service fee on it, and I was thinking, just by working an hour and a half in the job that I work, I'm able to pay for a whole month's worth of the Hero solution. If I were to require the in-home health services, where someone could help manage that medication, there's no way I could afford it.

So at that price, I'm getting that peace of mind, I'm getting a service that will maybe be even more accurate than a person coming in and counting medications and being required to keep up with titration and things such as that.

What makes it worth it is that it's my little robot buddy that I can trust. It's giving me what I need, when I need it. And I don't have to second guess it. It's as simple as that. Hero gives you peace of mind with an automatic pill dispenser that makes it simple and easy for your loved ones to take the right medication at the right time, every time.

Get a Hero Now